Ciguatera fish poisoning comes from eating fish that is contaminated by 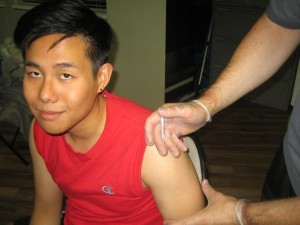 ciguatera toxin. Ciguatera toxin, an odorless and tasteless toxin, is lipid soluble compound, produced by Gambierdiscus toxicus. It is heat resistant, thus cooking will not destroy the toxin. The ciguatera toxin is commonly found in large reef fish such as, barracuda, black grouper, blackfin snapper, red snapper, eel, greater amberjack, sea bass and Spanish mackerel. When the large reef fish ingest dinoflagellates or certain smaller fish, they accumulate the toxin. Although the large fish may accumulate the toxin in their body, it does not cause harm to the fish, but the same cannot be said for humans.

Ciguatera fish poisoning is reportedly the most common seafood-toxin illness worldwide, with approximately 50,000 cases each year. Although common, they are rarely fatal. Children are more prone to severe symptoms, which will be discussed further later. Although there is no cure, symptoms can be treated aptly.

Ciguatera fish poisoning results to gastrointestinal, cardiac and nerve damage. Although symptoms general show within six to eight hours, there have been cases where symptoms began to manifest as early as two hours or as late as eight hours. The common symptoms include:

When to Seek Medical Attention Regarding Ciguatera Fish Poisoning

Although there is no general protocol in treating ciguatera fish poisoning, there are some cases which may require seeking medical attention. If any of the following begin to show, seek medical attention:

How to Treat and Manage Ciguatera Fish Poisoning

Because there is not antitoxin available for ciguatera fish poisoning, it is normally advised to do some first aid to avoid complications from this type of poisoning.